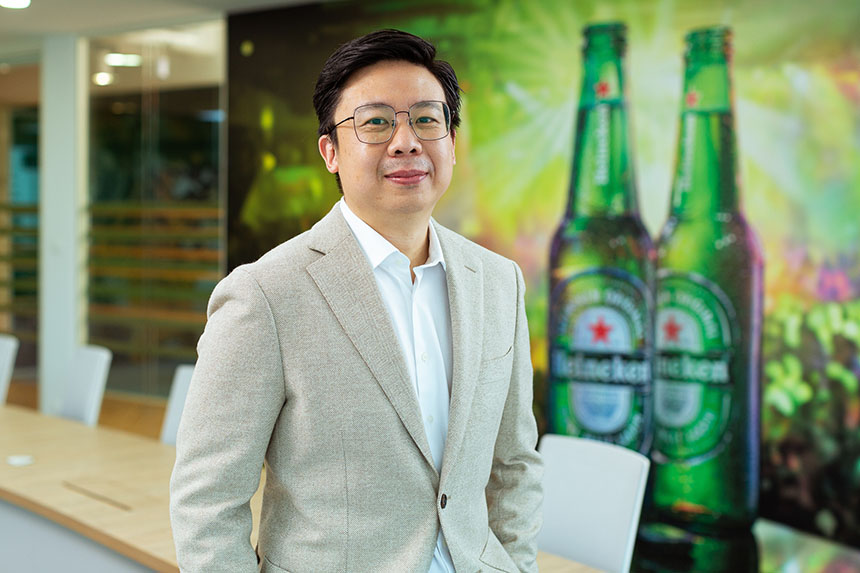 Gerald Yeo, marketing director of APB Singapore, says the introduction of zero-alcohol beers will complement the company’s existing portfolio of beers by providing more choices to consumers across drinking occasions, which is key in cementing its market leadership

When Garage Project first opened its tap room in 2016, the New Zealand-based craft beer brewery challenged itself to develop a low alcohol beer. What started as an attempt to meet New Zealand’s legal requirement of having at least one low-alcohol beverage on premise turned out to be a surprise hit.

The 2.2 per cent ABV (alcohol by volume) beer – Fugazi – flew off the shelves, prompting the brewery to take its research and development further and develop a booze-free beer called Tiny. Many batches of beer later, Garage Project is struggling to keep up with overwhelming demand.

Garage Project co-founder Jos Ruffell estimates the no-alcohol beer project cost some NZ$75,000 (S$67,102) in investments, but has been worth it because people consuming non-alcoholic beer tend to end up drinking more as long as it tastes good.

Ruffell and Garage Project join a growing number of brewers and retailers who are discovering what has been dubbed the NoLo market: a growing market for no- to low-alcohol beverages. The market is tiny – just roughly 3 per cent of the total alcohol market. But with more consumers beginning to worry about the impact of alcohol on their health, IWSR Drinks Market Analysis is expecting this market to grow.

The NoLo movement is driven partly by a changing narrative around alcohol. Recent studies have debunked long-held beliefs about the perks of alcohol consumption – such as the one that a glass of red wine a day can be good for the heart. Meanwhile, annual no-alcohol challenges such as “dry January” and “sober October” are gaining traction.

“People want to go out and have a good time at bars with friends, and don’t necessarily want either the calories or the alcohol that come with higher-strength alcoholic beverages,” says Matthew Fergusson-Stewart, managing director of spirits and bar consulting company Spun Spirits.

Not all NoLo drinkers are teetotallers. “It is no longer about providing a drink for that one pregnant friend, or abstaining. It is about having options available to suit your lifestyle – moderation, not elimination,” says Jasmin Wong, co-founder of local bottle shop Temple Cellars. “It’s the possibility of having (an alcoholic) drink on some nights, and a non-alcoholic one on others.”

Temple Cellars is currently focusing on the non-alcoholic wine alternative segment, and saw a 100 per cent year-on-year increase in sales for its NoLo segment in Q4 last year. This month, it started stocking a new product called Jukes Cordialities – an organic apple cider vinegar-based drink developed to replicate the mouthfeel and aftertaste of fine wine.

Alcohol-free bottle shop Free Spirit says its sales figures have grown some 50 per cent over the last six months. Its on-trade market such as restaurants and bars is also registering steady growth of 20 per cent month on month.

Co-founder Emma Pike says the NoLo market in Asia is not yet as big as it is in some Western countries. But she is convinced that it won’t be long before the booze-free segment takes off here as well.

“Drinking culture is so powerful in a lot of Western countries with a lot of Fomo (fear of missing out) and pressure around drinking, and that has fuelled the growth in alcohol-free alternatives for people who want to cut back without the Fomo,” says Pike.

The booze culture is a little more subdued among Asian consumers, but Pike says consumers here have the same health concerns.

One of them is 30-year-old S Shiva, who went for a health checkup 2 years ago and was told he was at risk of liver damage – a result of drinking hard liquor about 4 to 5 times a week.

Last year, in a bid to meet his health and fitness goals, he cut down on hard liquor and turned to low-alcohol seltzers – flavoured carbonated water mixed with alcohol – that contain just a fraction of calories and sugar found in regular alcoholic drinks.

Guilt over pandemic binges may also be weighing on the minds of some consumers.

“I think we see people coming out of the lockdowns and the situations we’ve had with Covid-19 and deciding to change their lifestyle. Maybe they consumed more during lockdown and came out wanting to consume less,” says Ruffell of Garage Project.

Hopping on the bandwagon

Yet, this ready consumer base is not easily tapped. NoLo beverages require some investment and expertise to get right.

Ruffell says Garage Project had struggled to replicate the taste of beer without the alcohol. “We destroyed a number of batches that we weren’t happy with,” says Ruffell. “It took a long time to get it exactly to the point that we wanted.”

Players with a bigger budget have slightly more options. Over at Heineken-owned Asia-Pacific Breweries (APB), one of South-east Asia’s biggest brewers, investments have been made into new machinery.

APB made its foray into the zero-alcohol category in 2019 with Heineken 0.0. To produce it, APB Singapore spent S$3.8 million to install a dealcoholiser at its brewery.

“This facility allows us to brew Heineken 0.0 by gently removing the alcohol to produce a perfectly balanced and great tasting zero-alcohol beer,” says Gerald Yeo, marketing director of APB Singapore.

The investment appears to be paying off. Sales of Heineken 0.0 at off-trade channels such as supermarkets and convenience stores grew 22.8 per cent year-on-year in 2021, versus just 3.2 per cent for its malts liquor business comprising beer, stout and liquor.

Pernod Ricard, meanwhile, has a brand team based in its Paris headquarters dedicated to developing NoLo brands for the group. The world’s second largest wine and spirits seller had also bought a majority stake in Ceder’s, an alcohol-free spirits maker, in January last year.

Japan’s Kirin Holdings is expecting sales of its non-alcoholic beverages to grow by 18 per cent this year compared with 2021. In 2020, its subsidiary Kirin Brewery rolled out low-alcohol Kirin Ichiban Zero Sugar after 5 years of research and development and 350 test prototypes.

A Kirin Holdings spokesperson says it will now focus on the sales of its no-alcohol beer Kirin Greens Free and continue to develop other innovative NoLo alternatives such as Kirin Karada Free that contains just 5 calories per 100 ml.

One benefit of dabbling in the NoLo market is the potential for better margins.

Alcohol duties vary by alcohol strength and the type of beverage. At S$60 per litre of beer, the alcohol duty in Singapore for a regular pint (473ml) with a 5.5 per cent ABV comes to S$1.55. Duties on wine and other spirits stand at S$88 per litre.

The alcohol duty, which goes to the government, limits the amount that retailers can pocket when they mark up the price of a product. The less alcohol there is in a drink, the less duty needs to be paid.

Free Spirit’s Pike says her shop follows “standard markups in line with other food and beverage sales, which are anywhere between 25 and 45 per cent”.

And while Pike says some customers do assume that alcohol-free products should be cheaper because they do not contain alcohol, she notes that these are also speciality products produced in smaller quantities. This accords the alcohol-free products something of a premium, “especially when dealing with higher-end, boutique products”.

Free Spirit is gradually bringing the costs of some product lines down by increasing import quantities.

Over at Garage Project, cost savings from alcohol tax have made the brewery’s NoLo options more accessible.

But Ruffell says cost savings are also limited by the ingredients required to ensure that taste isn’t compromised.

Alcohol tax is Garage Project’s “single largest ingredient cost”, he says. But for NoLo beers, the brewery has to overcompensate with hops – a key ingredient in brewing beer – to give the beers plenty of flavour.

Thirst is here to stay

Margin opportunities aside, industry players generally agree it is important to ensure customers have access to a wider range of choices to suit their drinking needs.

“Anyone in the alcohol trade needs to either move with trends or get left behind. While nonalcoholic drinks don’t need licensed distributors, the drinking occasions fit more strongly with the existing client base of alcohol distributors,” says Spun Spirits’ Fergusson-Stewart.

“It is absolutely sustainable and more companies are investing. Ultimately, there may be a flooding of the market and some players will not succeed, but this is a trend that appears to be here to stay for quite some time; it’s not just the latest gimmick that will pass in a year or two,” he adds.

Over at APB, for instance, the alcohol category remains the key contributor of revenue. But the company is looking to continue scaling the zero-alcohol segment.

APB’s Yeo says the introduction of zero-alcohol beers will complement the company’s existing portfolio of beers by providing more choices to consumers across drinking occasions, which is key in cementing its market leadership.

As the NoLo segment gains momentum, the next step is to ensure these drinks are more readily available at on-trade premises such as bars and restaurants.

APB is looking to cultivate NoLo consumption patterns at “on-trade premises”. To do so, Yeo says the company plans to use tactics such as “outlets seeding, sampling exercises, and menu education with food purchase”.

Pike of Free Spirit sees similarities between the alcohol-free movement and the vegetarian movement. “Think back 10 years ago: there wasn’t a vegetarian section on most menus, and now it’s standard,” she says.

“We’d love it if NoLo alternatives that aren’t mocktails or sugary soft drinks became a section on each drinks menu as a standard listing.”

“People want to go out and have a good time at bars with friends, and don’t necessarily want either the calories or the alcohol that come with higher-strength alcoholic beverages.”

« Prev Article: The Straits Times: NTU accountancy student with muscular dystrophy wants to give free financial advice, services to the needy
Next Article: A sneak peek at our fun workplace »