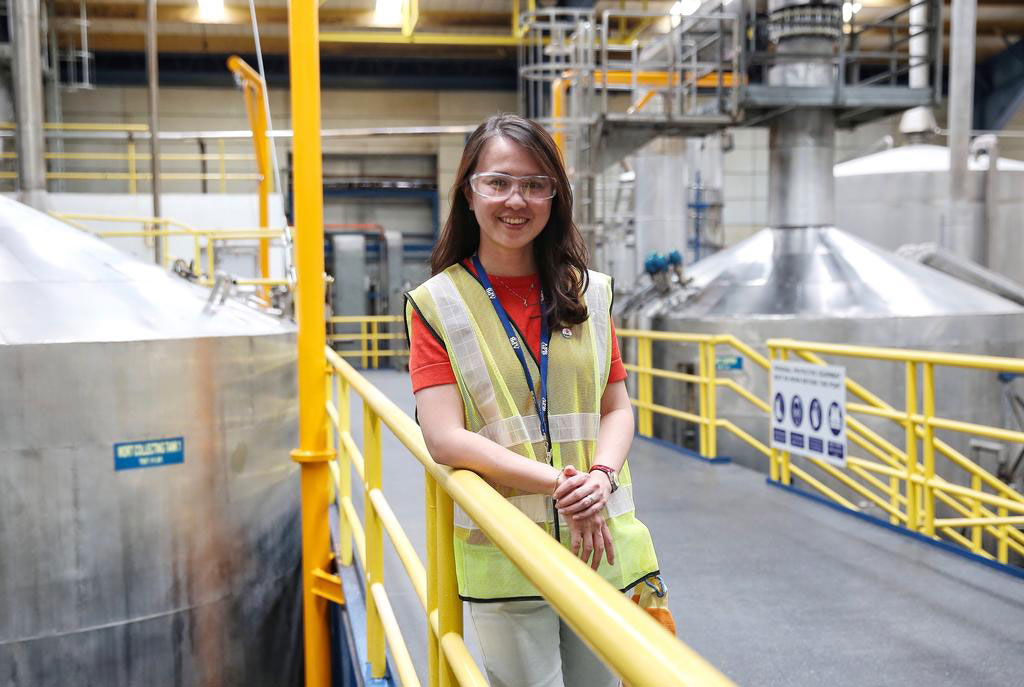 SINGAPORE — Carrying up to 25kg of ingredients, and working in hot and humid areas that go up to 45°C — these are just part and parcel of the job of a beer brewing manager.

No surprise then that it is seen as a vocation for men, but try telling that to Ms Lim Yee Fong, who has been working at Asia Pacific Breweries Singapore (APBS) for more than eight years.

Having started as a brewing technologist in 2010, the 36-year-old was recently promoted to a managerial role in January.

As a brewing manager, she oversees the work of a 27-strong production team, inspecting tanks and tasting beers to make sure that standards are met.

She also has regular meetings throughout the day with her engineers and technicians.

“I remember my family saying it’s very rare to have a female in a production area. What’s more, it’s this industry, the beer industry, where there are even more males,” she said in an interview with TODAY ahead of International Women’s Day on Friday (March 8).

But there was no difference in the way her colleagues treated her, Ms Lim remarked. “They never looked down on me.”

Advantage of Being a Woman

Initially, she found it tough working in a place where the majority were males; she was just one of two women in the production line at APBS when she started. Now, there are about 20 women among the 170 production staff.

“When I first joined and needed to talk to a lot of people, my face would turn red very fast. I was among so many guys and I was not familiar in this environment.”

Despite feeling uncomfortable at first, Ms Lim quickly developed friendships with her fellow colleagues. The long hours together helped bond them as a team.

“I spend a lot of time with them… Sometimes I see them more than my family,” she quipped. Her day starts at 7.30am at the Tuas brewery and ends at about 5pm.

Being a woman has its advantages, too.

“I have a different style of leadership, maybe it’s because as a lady it’s easier to instruct people in a nicer way, with a more caring approach,” she said.

“After all these years, they’re all like my buddies, uncles and even father figures sometimes.”

On the challenges faced in beer production, Ms Lim said they were mostly related to the job’s physical aspects. This was a stark contrast to her previous roles in quality control and quality assurance, where she could sit in the confines of a comfortable air-conditioned office.

“Previously I was more involved in paperwork. But now it’s different, there’s more physical work. You have to walk around, inspect the tanks, carry loads.”

Once or twice a week, Ms Lim helps to manually transport heavy bags of ingredients within the brewery premises.

“Compared to the guys it’s quite challenging for a girl,” said Ms Lim. “But they (her team) are very helpful and we help each other to carry the loads.

“When you look back on it, it’s not a key challenge after all because there are some things you can’t measure, like job satisfaction.”

A colleague of Ms Lim described her as a driven leader.

“She has always been a very resilient, meticulous and dependable colleague to us. As a professional and driven individual, she is persistent on ensuring that we deliver the highest standards possible,” said Ms Ong Siew Ling, 42, a quality assurance executive who has worked alongside Ms Lim for over eight years at APBS.

“I couldn’t have asked for more in a close friend, colleague and mentor.”

Ms Lim joined the industry due to her passion for food science and production.

But her parents were not as open to the idea of her being in the beer-brewing business.

“They’re quite old school; they were worried that after I joined I would become a very good drinker,” she said. “And of course, the male environment.”

After taking them to family day events and introducing them to her colleagues, Ms Lim’s parents were then reassured that she was in good hands.

Constantly surrounded by colleagues of the opposite gender, one might expect Ms Lim’s husband to feel jealous and wary of her position.

“He’s very supportive,” remarked Ms Lim. “I really appreciate that he also comes from a manufacturing background, so he understands the process and the environment.”

The couple has no children.

Advice for Other Women

“When life gives you lemons, make lemonade.” Ms Lim learned this lesson from her mother, whom she described as her role model.

“She never cared about how difficult her work was, even as a housewife. For Chinese New Year gatherings, she single-handedly cooks for 20 people every year. And she never said she was tired,” Ms Lim recalled.

As to what is her advice for women who want to pursue careers in male-dominated industries, Ms Lim said: “Rid yourself of doubts, trust yourself, break the barrier.

“Even now, I’m trying to step out of my comfort zone, stepping up in the role as a manager. I know that there will be challenges, but it’s important to not doubt yourself and not give up.

“Fears and doubts are normal. But there’s no harm in trying and you’ll learn from the experience.”
Read more at https://www.todayonline.com/singapore/creating-her-own-happy-hour-thriving-male-dominated-beer-brewing-industry